They wish to serve you.

If you have not noticed it is election time. I make a habit of avoiding political office holders or candidates

in this blog but they are part of our Wayne County culture so a few photos seem to be in order.
More photos and a short video after the jump.


During each election season the League of Women Voters of Wayne County has historically hosted a candidates night at Wayne College. During this event political candidates take the stage and respond to questions from the public. Those asking questions have the option of asking verbally or writing the question on a card and passing it in.

I have attended this event for many years and have always found it interesting to watch those running for office think on their feet (or in some cases try to) as the questions come in. 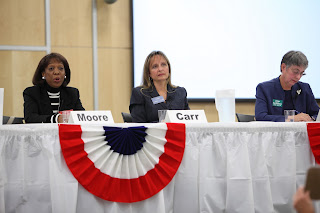 The photos shown hear depict each candidate that participated in last nights session. Some running for office did not attend… interesting.


Candidates who were unopposed did not take the platform.

November 2nd is election day. Take time to exercise your right to vote.