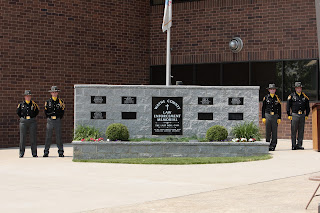 In the front of the Wayne County Justice Center is the law enforcement memorial wall. On this wall are the names of five men who lost their lives while serving the citizens of Wayne County. Their stories are as follows…


Died January 9, 1968, at age 52 with seven years of service to the citizens of Wayne County. Clifford went to Doylestown to transport a mental patient to a Cuyahoga Falls hospital with two other officers. Upon approaching the subject, Clifford was struck on the right side of his head with a board by the subject. They were able to subdue the subject and take him into custody. While en route to the hospital, Clifford suffered severe chest pains and was rushed to Barberton Citizens Hospital, where he was pronounced dead on arrival.


* Patrolman Robert Goodrich Wooster Police Department
On July 5, 1969, Sergeant Knisley and Patrolman Goodrich were conducting rescue operations due to a flash flood. They were in the Bauer Road area, responding to reported calls for help from people trapped on their house roofs. They were in a small boat attempting to rescue when the flood water current spun and capsized the boat. Both officers drowned.

* Sergeant Harold K. Hanning Ohio State Highway Patrol
On August 6, 1970, Sergeant Hanning, a pilot in the Aviation section, was flying over Wooster Township north of US Route 30 in Wayne County when the plane crashed into a wooded area. He had been helping to round up cattle set loose after a traffic crash.