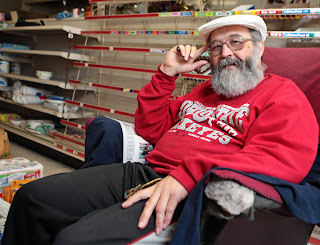 The name on the sign outside the door says “Clintons” inside you will find the stores owner . He sits in a worn swivel chair that is covered with blankets as he watches the traffic pass on the main street of Marshallville. His name is Bill Clinton and he was born 62 years ago in a house just a few streets away.


I told Bill that I was interested in a brief story and a picture and he agreed and noted that the store had fell on “hard times”.

“My grandfather Theodore came here from Akron about 1919 and opened the store. I can remember hearing stories about him traveling though rouges hollow as be obtained supplies” Clinton said.

Clinton said that his father Russ operated the store after his grandfather (Theodore ) retired. “My first job was that of a stock boy for the store. I made .25 cents per day and eventually earned .25 cents per hour.”

The store is located next to the fire department and Clinton said that his father could control the fire siren from within the store and blew the siren at noon each day. “It still goes off at noon, but it is controlled in Orrville” he said. Russ Clinton was never a formal member of the department but was know to direct traffic in front of the store as the members of the department responded.

Bill on the other hand has been a member over 35 years. Living next to the station, he responds to nearly every squad run and serves as both a firefighter and EMT.
Baby boomers might remember Russ as the man to wore the grocers hat and apron. You may have visited the store for a popsicle, or traded some pop bottles in for a deposit.

Clinton told me upon reaching adulthood he worked for a Orrville company for 29 years before the company closed and he was layed-off off just months prior to becoming eligible for a pension.

Upon the death of this father in 1995 Clinton purchased the family store from his brother and sister.

Over the years however Clinton has seen his business dwindle. Today the shelves are mostly bare.

“ A few People come in for a can of pop or a candy bar and I have one guy who comes in every day for an orange juice. Other than that people just come in when they need something in a emergency” Clinton said. 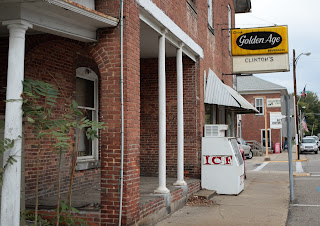 Long time Marshallville resident Rich Stoll (now in his 70s) said he can recall visiting the store as a child. “The sold everything, bib overalls, shoes, meat cookies, they had it all. They even had a crank gas pump. There was a time when you could buy gas in four locations in Marshallville. Today there are none. ’’ Stoll said.

Clinton said the store is all but out of business as there is no money being made.

As he sits in his chair Bill Clinton is surrounded by 80 years of Americana. What is left of a true mom and pop operation is about to fade into the history books.