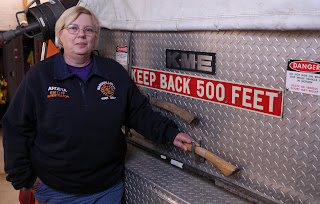 She has lived in Marshallville for of her life and has served those who live in and around the town for nearly as long.

Ardeta Romanchik joined the Marshallville volunteer fire department in 1976 after her husband suggested it.


“My stepfather had been on the department so I grew up around it as a child. My husband Gary had been a member for about two years and he told me that a EMT class was going to be starting. It sounded interesting so I joined the department and became a EMT” she told me.

Romanchik said the training for a EMT at that time was 60 hours and has doubled to120 hours over the past 34 years. It is expected to rise again in the near future.

She told me that the increase in training is the single most noticeable change in the fire service during the years she has been involved.

Romachik said she recognizes the need for the training but pointed out that it becomes increasingly difficult to find qualified people who are willing to take the time to train and then continue to serve the department.

When ask what keeps her doing the job after all these years she said “because nobody
else will do it” with a chuckle.

I learned that the term volunteer is not exactly accurate. Members of the department do get paid. Those who are trained as both EMTs and Firefighters take home $200.00 per year provided they attend the required training and meetings.

If you missed it that is two hundred dollars per YEAR.


Romanchik shared a experience that happened not long ago. “it was a car crash and the victim was bleeding badly. I was holding a cervical collar in place when the victim began to thrash around. Some of his blood ended up in my mouth”
Clearly in the days of HIV this is not good news. As it turned out the person was not HIV positive but how would you feel it this happened to you?

Those that serve do so as a commitment, not for the money or glory.

After serving as a EMT for ten years Romanchik recognized that the department had a shortage of firefighters during the day. As a way to help she expanded her training and became a certified firefighter in addition to her EMT training.

“ I run the pumps on the trucks when we have a fire” she said.
In addition to serving with Marshallville Romachik also serves as the secretary for the Wayne County Fire & and Rescue Association.

As a bit of a history Ardeta shares how firefighters responded in the “early years”….

The vast majority of fire and EMS protection in Wayne County comes from people like Ardeta Romanchik. People who step up to the plate and do what needs to be done (often risking their lives) because it is the right thing to do or because nobody else will do it..

I would like to say "thank you" to Ardeta and all of the men and woman to serve in the fire service.
at October 22, 2010