"Smithy" and his million dollar adventure. 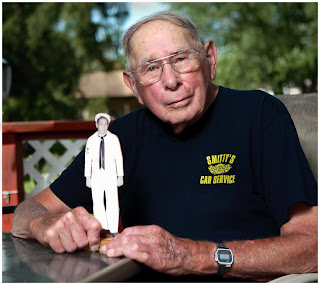 Now what are you going to do?” That was the question Bob Smith heard from his father when he graduated from high school during the great depression.


“Jobs were hard to find, my dad was working in Barberton, but dad said his boss could not find a job for his own son, so I knew there would be nothing for me. So I started by own business selling gas and oil.


Smithy’s service station would soon become a successful location for motorist to fill their tanks as they traveled on what was then called ‘Route 5” that ran south out of Doylestown.
Within three years however uncle Sam sent smith a letter offering him employment.
He had been drafted.

“I wanted to enlist and my first choice was the Marines. I went for my physical and they told me I had flat feet and could not serve.” After receiving the draft notice, Smith went for a second physical for the Army and was told his feet were fine. Frustrated buy what appeared to be double talk Smith attempted to enlist in the Navy and was again told he had flat feet.

“It seemed that my feet were fine for the Army but flat for everyone else. I tried the Navy one more time and was accepted.

World War II war was on and Smith said his basic training was just that…basic. “I was in the Navy and could not swim. They knew that in basic and said they would teach me later but that never happened.. Even today I cannot swim a lick” Smith said as he laughed about the situation.

Soon Smith would find himself on the US McCall. The ship was a destroyer and Smith served as a torpedo man and the ships mail clerk.

Smith said he and the ship were involved in many battles in the pacific and earned nine battle stars for his involvement.

“I saw the Kamikaze plots and they would circle overhead and then just dive right into the ships in our group." “Smith said that he witnessed the attack on the USS Roosevelt that resulted in hundreds of sailors being killed.

"The McCall however never lost a man, and never took a hit, I guess the big man was looking over us.” Smith said.
Smith told other stories such as the rescue of eight American pilots in one night and surviving a hurricane that created waves over 100 foot tall.

It would appear that each day of service is a bit if history but some moments stand out more that others.

Tweed was the chief radioman on Guam when the Japanese invaded the island on December 1941. He and five other men slipped into the Guam jungle rather than become prisoners of war. Tweed lived in the jungle for over two years before he spotted the USS McCall and sent messages by using a mirror.

“Fourteen guys from our ship took a small boat ashore and made the rescue. Once Tweed was on our ship he informed us that we had been sitting directly under the Japanese six inch guns. Why they did not open up on us I will never know."

Smith said that as move was made about tweed in 1962 called "No Man Is an Island" and he went to see the movie.
Speaking of the scene where Tweed was rescued Smith laughs, "In the movie they go in with guns blazing, that’s Hollywood, I was there and not a shot was fired.”

As the mail clerk for the ships crew of 247 Smith said that the value of mail to a serviceman could not be measured.
“It (the mail) is a great way to boost morale and learn what is going on at home. We went for six months without mail at one time. We were just moving around and the mail could not catch up.”

Upon his return the money was put into his service station. “I put two bays and bought a hydraulic lift. $1500 would not pay the tax on that stuff today” Smiths son Jeff now runs the establishment.

Smith told me that during the war that the local pharmacy in Doylestown produced small cutouts of servicemen and placed them in their window until their return. This would be part of the charm of a small town. Smith still has his cutout and it is seen in his picture above.

Speaking of his military service Smith said “ I would not take a million dollars for it, but I would not pay a nickel to go back!”
at September 05, 2010