The "Sleeping Beauty" of Rittman. 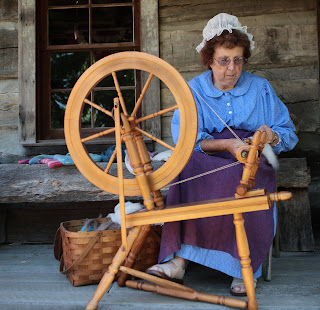 I must admit that my exposure to a spinning wheel has always been limited to my (forced) reading the book “Sleeping Beauty” when I was in grade school. Recently I discovered a local woman who spins yarn not in a castle, but in her Rittman home.


Ellen Moore, a retried registered nurse told me that she has been sewing most of her life and started when she was exposed to the craft in a 4H club as a child. It was not until years later that she became interested in spinning.


“I inherited a spinning wheel that had belonged to my fathers side of the family. My sisters did not want it but I looked at it and knew it was something that I not only wanted, but I wanted to learn to use it.”

Moore said she had no idea on how to use the spinning wheel and needed to take lessons to learn. While doing so she discovered the wheel she had inherited was designed to spin flax and was intended to produce fine thread used for making linen.

“The person who was teaching me said this was not the best way to learn so I purchased another wheel that is designed to spin wool.”

The wool is spun into yarn that can be knitted into any number of creations.

When a person thinks of wool they typically think of sheep. But Moore told me she obtains most of her wool from a local alpaca farm. “I use a blend of alpaca and lama wool. The quality of the wool depends on the animal. Market lambs generally do not have as high of quality of wool as sheep that are raised for wool production. The same is true for alpacas and lamas” she said.

The wool is dyed to give it the desired color. Ellen said that there are a number of commercial dyes to color the wool but natural products such as walnuts and goldenrod can also be used depending on the desired color.

“I have always enjoyed sewing and quilting it is just something I like to do. I find it rewarding to see a family member wearing a pair of socks that I made.” She said with a laugh.

Moore said that she is frequently requested to attend historical festivals to demonstrate her spinning skills. “ Its not difficult to learn, I would say the most difficult thing is finding the raw wool to use” 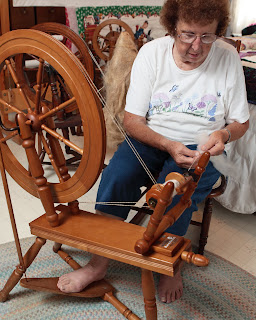 Looking around her sewing room one sees four spinning wheels and a large quilting rack that contains beautiful quilts in different stages of completion. She said she was recently inspired by he TV show “Sewing with Nancy” and is now making dresses to send to oppressed African girls.

Moore said that she had been active in two sewing guilds but had to drop out of one when the meeting nights conflicted with her church choir practice. “If you are going to sing in the choir you must practice, and church comes first.” she said.
at September 03, 2010