Now you are going to look. 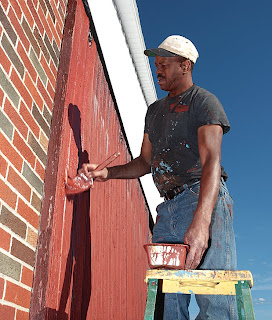 Just three days before the start of the Wayne County Fair found Henry Bevins putting a fresh coat of paint on the Kiester building.

Bevins told me that he is the owner of S&H pressure washing and does much of the washing of the buildings prior to the fair. In addition to pressure washing Bevins said he does some painting when its called for.


“The roof of the grange hall was covered with grime but I had a way to get it clean” Bevins said. It was clear that this man takes pride in his work as he pointed out how clean the roof of the building was.

Bevins said that he had also washed the Kiester building and others prior to applying the fresh paint.


I asked Bevins what S&H stood for and he explained that his wife’s name is Sue so S&H stands for Sue and Henry and has been that way for over 25 years.

If you are one of the thousands of people who visit the fair over the next week, chances are you would never pay attention the clean roof on the grange hall or the fresh paint on the doors of the Kiester building. But if you are reading this…now you just might.
Herny Bevins played a part in making the fair what it is.

Henry said “Nothing says American like a County Fair.”
at September 09, 2010