His name is Jim Clay...a warrior who as been there and back. 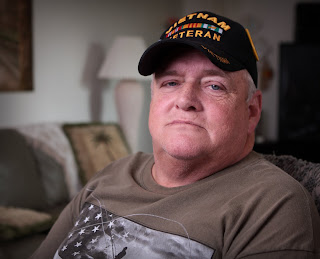 The year was 1968 and he was 19 years old and had been married for 88 days when he received the letter that would change his life.

“It was from Uncle Sam and I can’t remember what it said, but I knew I had been drafted” said Jim Clay who lives near Orrville. Soon he found himself in Cleveland with 400 other men taking a physical. By the end of the day he and three others were assigned to the Marines.


Laughing about his luck, Clay commented “The Marines would not have been my first choice. The survival rate for a Marine in Vietnam was not that great, but I will tell you one thing, they have the best training”.


Soon Clay found himself in basic training in Paris Island South Carolina. As the graduation date came close Clay received word that his grandfather had passed away. Clay was granted a five day emergency leave to attend the funeral and missed the actual graduation of his basic training.


“I was close to my grandfather. When I was 15 years old my mother asked me what I wanted for Christmas. I told her I wanted a bus ticket to go see grandpa. He lived in Wayne County West Virginia at the time. She bought me the ticket and I made the trip alone. It was a big deal to a 15 year old kid.”

Once in the Marines Clay was given a battery of test and was offered a chance to attend officers school. Clay said the idea appealed to him and everything looked good until someone asked his age.


“I was all set, and then someone ask how old I was. They had all this paperwork and had given of these test, and they did not know my age?” Clay was not permitted to attend the school due to his young age of 19.

“I arrived in a C130 transport plane and has the pilot was about to land he came on the PA and announced that he would not be stopping the plane. He just lowered the ramp in the back and we just kind of jumped out. I guess you would call it an airport, but it was nothing more than a shack and a runway and it had been attacked just days prior to my arrival. The pilot did not want to stick around.” Clay told me.

Clay spent a year in Vietnam and served eight months as a gun team leader. He and said that his unit received special recognition for covering  the most territory, having the most confirmed kills and loosing the fewest men.
In speaking with Clay I found the stories of combat were endless and fascinating.

One story. “We were in a fight and they were throwing grenades and shooting at us. I was linking ammo for a M-60 and other guy was firing it and he got hit. One of by buddies said he was going to throw a grenade and I told him to go ahead and throw it. I was laying in a ditch when he threw it. I looked up and saw the grenade strike a tree and bounce off and then roll right back to me. I jumped up and dove for cover as the grenade exploded. It was like standing on a volcano“.
Clay was not hurt but the machine gun was damaged.

“People always ask, what was the worst part about Vietnam, I tell them coming home” Clay said.

Clay came home and found another man with his wife (lets make that ex-wife) and a country that seemed to lack appreciation for what the military men were doing.

Clay said that he had made one request of his mother prior to his deployment. “My sister was two years old and I told mom to never let her forget me”. Clay made a surprise visit to the home when he returned and said he can still remember that it was his then 3 year old sister who spotted him coming in the door and said “Jimmy’s home”

After completing his military service Clay pursued a carrier in sales until having a heart attack six years ago. 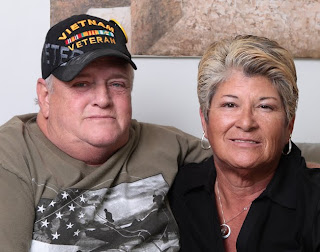 “I credit my wife (Jill) for helping me keep on track, she helped to keep me focused.”

When asked if Vietnam changed him, Clay said that he denied that for many years and admitted that he returned with a true hatred of Asian people.

I asked him it that still was the case today. He smiled and shook his head no. “Go get the picture baby“, he said to Jill. His wife came back with an engagement picture of two people. Both were Asian. Clay had became close friends with the woman.


Clay said that the woman was going to be married next week and he would be giving away the young bride. “I credit this girl for helping me in my recovery, if you want to call it that” Clay said. 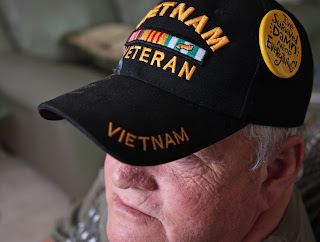 Clay said that he seldom leaves the house without wearing something that displays his pride in his military service and has noticed a increased appreciation for veterans as a result of the September 11th attacks on New York City.

As Clay told his stories of combat be often spoke of the men he served with some he held in high regard, some others not quite so much. This is a man who tells it like he sees it.

He left me with this quote. "warriors don't fight for causes they fight for each other."

After leaving the interview I called him for clarification on a few points. “I was looking at your website and your spelling sucks man” he told me with a chuckle.

His bluntness made me laugh. Jim, I thank you for your service... despite any spelling errors.

I came away from my interview with a fresh understanding of what the men who served with you experienced.