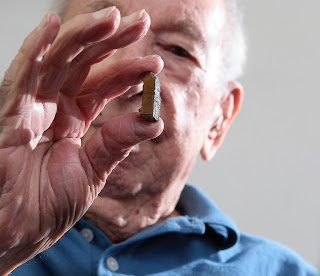 Every Sunday we recognize our military veterans. Today Les Berry of Wooster.


Many men who served in WWII were drafted. So was the case with Less Berry. Part of the process required those who were drafted to pass a physical. Due to a medical condition Berry was unable to pass this and was given the ranking of “4F”… Registrant not acceptable for military service.

This was not acceptable for Berry. He wanted to serve and was going to find a way to do it. “ I hated the rating of 4F, it seemed that people looked down at you like you got a free ride and were going to sit out the war. I did not like it one bit.” Berry said.

Berry told me he grew up in Wooster and had always attended the air races in Cleveland prior to the war. “I had a fascination with aviation and wanted to fly. I enlisted in the Army Air Cadet program and was accepted."


Berry became a pilot when to the Army Air Corp primary school and learned to not only to fly, but was also trained as a navigator and bombardier.

Berry was soon sent to England and was assigned as a bombardier of a B-17. The plane known as the flying fortress.

“Prior to my arrival in England crews were required to fly 25 missions before being reassigned to safer duties. When I got there they raised it to 35. Just my luck.” Berry said with a chuckle.

Berry said that briefings took place at 4am and the missions involved thousands of planes and often took over ten hours to complete.

Berry sat in the glass nose of the B-17 and literally had a front row seat of the action.

“You could see all of the anti aircraft fire coming from the ground. The would shoot and the shells would explode in the air. Sometimes planes would go down”. Berry said he could recall one incident that involved a damaged plane falling from the sky striking another plane taking it down as well. “I could see the men falling from the plane…and they did not have parachutes.”

Berry told me that on one occasion part of a shell blasted thru the glass just inches from his seat. “It hit my briefcase and went right thru it and went all the way to the back of the plane. I still have the fragment. You want to see it?” He said.

Of course I said yes, and with that he left the room and came back with the fragment that could have killed him.

Berry said his job was to make the decision of when the bombs were dropped and to actually drop them. He said was aided by what was at the time a military secret weapon. The Norden bombsight.

As he described how the sight worked it was clear that he gave great credit to this instrument for placing the bombs on target.

Berry said it took about 40 seconds for the bombs to strike the ground after being released. “ You could see them hit, and it was rewarding to see them hit the target of the mission.”

On mission two of the four engines of the B-17 had been hit but the pilot was confident that the plane and crew could make it back on two engines. For some reason the windows of the pilots cabin froze over and the pilot could not see.

Half of the engines are gone and the pilot cannot see to fly. This is not good.

Time for a young man from Wooster to shine.

I was in the nose of the plane surrounded by glass and could see everything but the pilot could not see anything from his area. I was able to communicate with him on our headset and tell him what he needed to know to fly and land the plane. I credit my training for that.” Berry said. He was awarded the Distinguished Flying Cross for his actions on that mission.

Distinguished Flying Cross is one of the military’s highest awards

After serving in the military Berry returned to Wooster and lived a quiet life.

As I spoke to Les in his home I noticed a bowling trophy. There is a story that goes with it as well.

This trophy was awarded to Berry last year in Las Vegas when he became just the 11th bowler to top the 100,000  in the history of the United States Bowling Congress Open Championships. He did this at the age of 93.

That’s not the only prize in the home however.
Berry met is wife Evelyn at a dance 19 years ago. 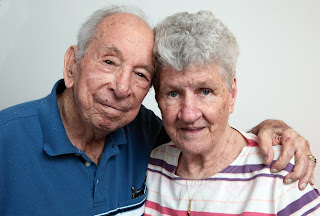 She tells the story… “I was up here from Florida and a friend suggested we go to a dance at the Lamplighters. While we were there they had a singles dance and Les asked me to dance. Later in the night they had a ladies choice, and I asked Les. After the dance I ask him to sit at my table.”


The two ended the night with a kiss on the cheek and both thought it would be the last they saw of each other.
“I gave her my number but figured she had someone in Florida and I would never see her again” Les said. But he did.

Evelyn said “ I went home and after a few days I said to myself what am I doing here? I just met this nice guy in Ohio why am I here”.

Les had given her his phone number and she made the call.  The rest is history.

How did he feel when Evelyn called?

“I was tickled, but I tried not to let it show” the WWII bombardier said with a smile.
at September 12, 2010