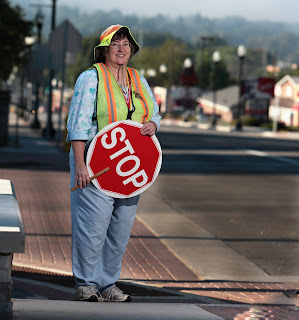 For if your find yourself regularly driving past the intersection of Bowman Street and Beall Ave in Wooster you have seen her. You might waive, nod, smile or honk your horn. Or you might stare ahead.


Her name is Esther Schertz for the past 21 years she has been a crossing guard for the Wooster City Schools.

Like others, I have driven past this woman for many years. I always noticed that she is always smiling and waiving to others and talking to the children. Recently I decided to park my car and have a chat.


As I was approaching she was having a conversation with two youngsters who were waiting to cross the street. “ My name is Esther” she told the children as she held up her stop sign and escorted the two across the street.

“I like the children to call me by my first name. I want them to know that I am someone they can trust if they have a problem.” She told me.

Schertz said that she does her best to learn the names of the children who he safeguards. She also noted that with over 21 years as a crossing guard she is now seeing a second generation of children. “The parents of some of these kids were children I helped cross the street” she told me.

I asked Schertz how the job had changed over the years. “People are more impatient and do not pay attention and the lights cycle faster. Sometime the lights get down to 25 seconds and I have to call the city to adjust them".

As she said the line about lack of attention I noticed the next four drivers that passed were talking on cell phones.

Schertz said that she was hit in1996 by a driver who was not paying attention. “She did not see me and knocked me into the McDonald's parking lot. I still have problems with my back as a result of that.”

I spite of the downsides Schertz said she loves her job. Its about keeping the kids safe. Nothing more. It’s a thankless job, but I love it.

Schertz told me that in the winter she brings rock salt from her home to salt the sidewalks near her intersection. “I just want everyone to be safe she said.”
When she is not serving as the crossing guard Schertz said she continues to pursue her masters degree in business administration..

As I was taking her picture many drivers were cheering her as a sign of support. One guy asked “ are you making a calendar?

Hundreds of cars pass her each day an most of them never knew her name.
Now you do… It is Esther Schertz and she wants to keep the children of  Wooster safe.
at August 28, 2010