This is not grandmas "shake and bake" 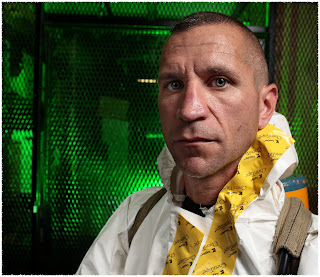 Senior Agent Don Hall of the MEDWAY drug enforcement agency is the man to gets the call when things get nasty. His suit is not the latest designer Armani, but rather white plastic, sealed with a special tape. His air is delivered via a pressurized tank. His footwear? Bright yellow rubber boots.


“Right now meth is real bad and everything we encounter is made using the shake and bake method”.

Hall explained that the term "meth lab" is often confused with that of a scientific sterile laboratory and nothing could be further from the truth.

The modern "meth lab" often consist of nothing more than a few empty containers, some drain cleaner or other solvent and a few cartons of cold medicine. The “lab” can be located in a garage, a barn, or even the trunk of a car.


“Most of our cookers have other addicts go from store to store to purchase the pseudoephedrine. As a rule retailers can only sell two packages at a time. The other materials are not regulated, toilet cleaner, lithium batteries, tin foil, salt and a little water is all that is needed” Said hall.

Hall went on to say that using the shake and bake method the raw materials are dumped into a 2 liter soft drink container and shaken. A chemical reaction takes place and in about two hours the raw meth oil is extracted. After a another brief process ½ to 3 grams of methamphetamine is produced.
The meth sells for about $100.00 per gram.

“All of these guys have their own variations, on how they do it. Its kind of like making an apple pie, there is not just one way that it can be done. There are thousands of recipes. The fact that they get 1/2 gram one time and 3 grams the next gives you an idea of how hit and miss this actually is".

Unlike cooking apple pie, cooking meth can kill those involved.

“These guys just experiment with it. Sometimes they get it right and other times it blows up on them and they set themselves on fire or burn their house down. It is very dangerous." Said Hall

Hall is one of three agents at MEDWAY who have received special training on the cleanup of these labs.

“The training is a week long and takes place in Quantico Virginia. During the training you are fully trained in all of the hazards of the production of methamphetamine. The byproducts of the clandestine process are extremely toxic”

Hall said the protective suits that are worn are very hot and during warm weather agents are limited to 20 min of work in the suits. Often the clean up takes hours.

Hall explained that there are many EPA restrictions on the disposal of this waste and individual agency’s can find themselves paying thousands of dollars if it is not done correctly.

What are some signs of meth production? “to of the most glaring clues large amounts of pseudoephedrine packaging combined with two liter bottles with sludge in the bottom of them. Hall pointed out that in each case he has been involved with the "cooks" have removed the label from the 2 liter bottles. "They like to watch the process and the bubbles" Hall said.

Hall said that meth users are typical very paranoid and will often cover their windows with plastic or other materials to obscure what is going on. He gave one example of a “cooker” who was (mistakenly) convinced that his mail carrier was a undercover agent and had considered killing him.

Hall said “I find it interesting to interview these guys when we arrest them. Each of them have their own tricks and recipes but none have any form of quality control. It is unbelievable that anyone would think about ingesting any of this stuff.”
at August 18, 2010