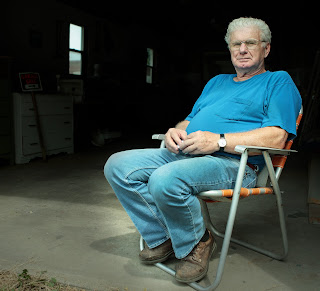 I was walking past his home when I saw Rex sitting in a lawn chair in front of his garage.

He saw my camera. “Out taking some pictures?” he said. I walked up the short drive and introduced myself and explained the 365 project him. Rex then invited me into the garage to show me his own project. Rex had been building bookcase out of cherry wood.

Rex explained that he was uncertain who the case might be for. He told me that it could be for a family member or someone else. “It just depends” he said.

As I was speaking with Rex the town fire siren blew. There was no emergency however. The time was 12:00. It is a common practice in the small villages of Wayne County to blow the siren to announce the noon hour. As the sound of the siren subsided I spoke with Rex further.


I learned that Rex had retired from the Schantz organ company in Orrville with over 37 years of organ building experience.

“I made the pipes” Rex told me as he explained that his job was to solder the pipes together for the massive pipe organs. Strange, I thought because as I looked at the cherry book case I would have thought that he was the builder of the wooden organ consoles.

I was thinking, here is a man who has helped build countless church organs, so I had to ask the question. Can he play one?

He laughed and said “no, but I know the scale” he said as he continued chucking about the question. He recited the musical scale it so quickly I could not write it down.

We live in a world where we often hear of bad things and bad people. Today as I spoke to Rex I was reminded that most people are good at heart. Here was a man that not only spoke to a stranger, but invited me into his garage and shared a little about himself and allowed me to capture a few images.

The next time you hear organ music think of organ builder Rex Raber. Rex just might be the man who made the pipes for the organ you are listening to
at August 24, 2010