Jim McComas... More than a guy in a suit. 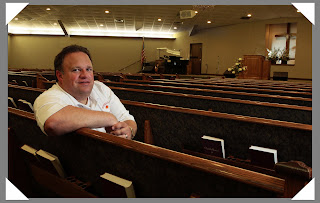 I had made arrangements to meet Pastor Jim McComas at his church at 2:30 for a photo and a quick interview. I arrived at the Church early and found it interesting that you cannot mistake the fact that you are in Creston Ohio. In the front of the Church you find a sign announcing the entry into the village limits. In the back of the church stands a tall blue water tower that says CRESTON.

As Jim arrived I noticed that he was wearing a white Norwayne Bobcats shirt with a basketball logo embroidered on it. Speaking of the shirt he said “I hope this is OK, I just finished walking in the Creston parade with Jim Renacci”. I assured him the shirt was great for what I had in mind. You see, McComas is all about Creston and the Bobcats.

McComas had just been named Creston citizen of the year. Having been recognized for his community involvement. His involvement was spurred by a tragedy.

Just three days after Christmas 2000 six Creston teens lost their lives in a single vehicle car crash. McComas who is the pastor of Canaan Free Will Baptist Church was called to provide comfort for the families and the community in general.


"I was standing in Murray’s funeral home during the calling hours when I looked out the door and I saw people lined up for blocks. I wanted to help these people but I realized that most of them did not know me. To them, I was nothing more than a guy in a suit"

"I soon I had the privilege to become involved in religious education at our Junior High School. I started with 12 kids. I now have 200 each week. I feel blessed that the school board supports this program.”

As his involvement with both the school and youth continued McComas now finds himself as the voice of the Norwayne Bobcats. It started with with youth football, and soon I found myself  as the announcer for both the boys and girls high school basketball teams.

“I approach it like I do when I am in the pulpit. When its over you are not going to be wondering who’s side I am on” he said with a smile.

In addition to his work in the Creston community, McComas serves on the board of the Wayne County Pregnancy Care Center, writes music, sings with the Representatives Quartet and is the father of two teen age sons. After hearing this I skipped the "what do you do in your spare time" question.

McComas told me "I am having the time of my life. I get paid to preach and that is my number one favorite thing to do. I live in the greatest area, we have great schools and people. This is just a great place to be. I feel that it is important to show our youth that I am a normal, approachable person. It could be 10 years down the road when they have a need. It might be then that they remember that I am a person that they can turn to".
As for the citizen of the year?  McComas said his family is not too impressed and suspects that he will still have to take out the trash.
at August 09, 2010