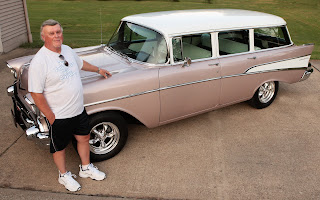 Drag racing history was made on May 15th 1971 and Doylestown resident Larry Patrick was behind the wheel. Driving a 1957 Chevy Wagon nicknamed “pappy’s toy” Patrick set a new world speed record for the F3-N class.

Soon after setting the record Patrick found himself serving his country in the military. During that time the the record setting car was left in the hands of his racing partner and was eventually sold.


Twenty eight years later Patrick was browsing the classified adds and noticed a 57 wagon was for sale. Upon viewing the car Patrick conferred the impossible… The car in the add was actually “Pappy’s Toy” and Patrick had to have it.


“I had not been looking for the car and just saw the advertisement by accident. The car was rough but, restorable” he said. It took eight years and countless hours to restore the car that now looks like showroom new.

Speaking of the smooth as glass paint job, Patrick said “I credit my friend Richard Stefanko for his assistance, he is one of the best painters I know.” 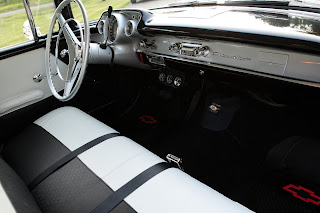 But this was more than a paint job. During the restoration Patrick stated that “every nut and bolt” was replaced or reconditioned. The car that made history on the track now drives better than new.

“We always called my dad "pappy" and my dad was racing the car before I did". Thus the car was  nicknamed pappy’s toy during its racing days” Patrick told me.

As he raised the hood of the car I saw the words “Thanks Murph” painted on the underside of the hood. Patrick said this was done as a tribute to his father Murphy.

Speaking of his racing days Patrick said he said other drivers protested his car more than once. “I had to face tech inspection when the protest were filed. Each time officials found my car was legal under the rules.”

What made Patrick’s car a winner? “ It was nothing more than attention to details and research. We would look at everything and make sure it was perfect. If something broke we made it better. We left nothing to chance and it paid off” Patrick said with a gleam in his eye.

Patrick told me that he always played by the rules and was proud of that fact.


“You need to see my man cave” he said as he motioned me into a small room in his basement. Once we arrived in “the cave” Patrick pointed out a quantity of racing memorabilia and trophies that he had won not only with the 57 but other cars as well.

Not all of the trophies are from racing however.

The same car that set records on the racetrack with its speed and power is now winning at car shows with its pristine appearance.