My Name is Lester 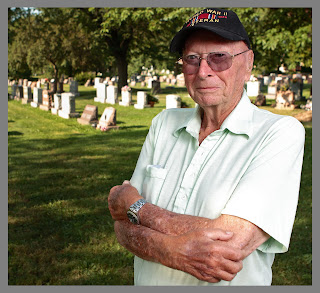 I make a habit of noticing license plates and the one on the van that drove past me said “purple heart”. I watched as the van stopped and its lone occupant got out and looked across the Rittman City Cemetery.


He was a thin man with a black hat. The hat said “ World War II veteran” and I could tell he wore this hat with pride. I knew this man would have a story to tell.

I walked over and introduced myself and thanked the man for his military service. The man smiled and nodded his head and said “thank you.” I explained the 365 project and asked him if he would tell me his story. He agreed.

“My Name is Lester, Lester Berger. I grew up on a farm and was drafted into the Army in 1944 and was sent to basic training at Camp Hood Texas. We had lots of other names for that place but none of them are suitable for print” he told me.

After basic training Berger said he was permitted to go on a seven day cruise on the Queen Mary cruse ship. This was not your normal cruse however. You see Berger was on the ship with 20,000 other US servicemen on their way to the front lines of WWII. The luxury cruse ship had been converted into a troop transport vessel.


“We arrived in Scotland and took a train to South Hampton from there we boarded a LST (Landing Ship, Tank). As we continued on the LST to Omaha beach.  Many men became seasick from the rough ride. The LST however was able to get us to dry land and we never got wet".

Berger told me that he was assigned to the 35th infantry and his job was to carry and fire a bazooka while his unit did battle with the Germans in France. 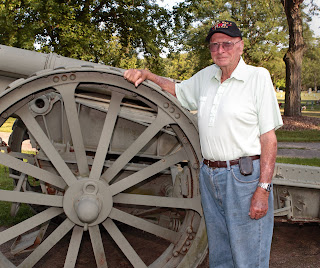 I ask him what the housing conditions were on the battlefield. “You ever hear of a foxhole? There was no housing. It was cold, and snowing. You just slept where you could. We had regular army boots and many men lost their feet from frostbite.

For food we had c-rations out of a can.

On occasion you would hear something about a hot breakfast . Something like pancakes and sausage. If it came at all, the food would be frozen by the time it arrived.”

“Truman had just taken office and there was a push to end segregation in the military. I was assigned to a tank crew that had a black man as a leader.

We were in a firefight and a German 120 mm mortar round landed within 5 feet of me. The explosion blew off part of my shoulder blade. I was hurt bad but the shooting did not stop.

The other guys were saying lets get out of here but that colored guy said “we are not going anyplace without that boy.” They grabbed me and pulled me into the tank.

I don’t know what would have happened had that man had not did that”
I told Lester I think you do. He said “yes you are right” as he nodded his head. He went on to say that from that moment on he has went the extra mile not to be racist.

Once his his military was service complete, Burger found himself back in the civilian life. After working 32 years for a Dodge casting foundry he retired and then worked as a maintenance man for a nursing home for 23 more years.

“My wife died in my arms 15 years ago. The last thing she told me is “I will always be with you” and I feel like she still is’’he said as he looked into the distance.

Burger said that during his wife’s illness he was assisted by hospice. “They were just great” he said of the hospice team. Berger was so impressed that he now volunteers for the hospice 11th hour program.

Speaking further about the 11th hour program he said, " I find myself going into the situation not knowing what is going to happen. But at the end of the day I feel like I made a difference. Sometimes I feel like Tiger Woods sinking a long putt, its such a great feeling to help someone" He said  with a smile while pumping his arm.

At the age of 86 Lester said he still mows the grass at this church and rakes the leaves there in the fall.

I never knew Lester until today. I truly felt honored to take his picture and tell a little of his story.
at August 08, 2010