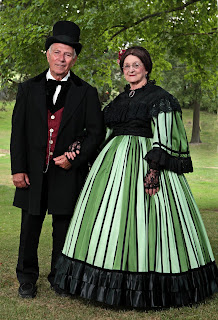 
Bud and Janice Maxwell of Marshallville add another Dimension to these historical creations.
"When we dress up we do so to represent the upper class civilian's during the civil war’ said Bud Maxwell.

So...How did this get started?

After giving the question some thought, the Maxwell’s said that their first taste of historical reenactment came during the Marshallville Sesquicentennial in 1967. As I asked the question about the first time, Bud quickly dashed to the bedroom to retrieve a photograph. The Maxwell’s laughed at he photo as if it was the first time they saw it.   In the photo, was he, Janice and their infant daughter Lisa. All of them dressed as early settlers.

While the first time was in 1967 it was not until the early 1990s that the Maxwell’s became serious about becoming Colonial Impressionist. Janice said that it was Lisa that sparked the interest in the 1860s reenactment.


“Lisa heard of a group in Medina that did this. We attended one of their meetings and it looked like fun. That was the start of it all”

So where does one get the outfits?

Janice makes them. Lots of them.

“I have been sewing most of my life and learned from my home economics teacher in high school. I make all of our outfits”. 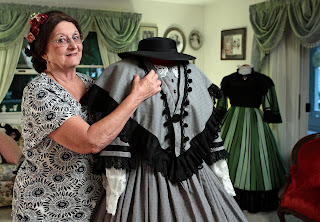 Maxwell said that the popularity of her creations became so popular that others requested the garments. Maxwell said that she has sold over 100 of her handmade outfits. Each of them made in her Marshallville home. “If I am not distracted I can make one in a day. Some of them take longer depending on the amount of detail that is needed” she told me.

The Maxwell’s said that they enjoy attending reenactments and parades. “You meet interesting people that you would never get to know under normal conditions. The fact that you are dressed up provides a common ground that sparks conversation.” Bud said.

What is the most common question that they are asked?
Bud said " Are you hot"
Janice said " Whats under there"

Uh, OK Janice what are you saying?
"People ask about the hoops under the dress" She went on to explain that the hoops are called bones and that most of her dresses are designed for 6 to 10 "bones".

Both of the Maxwell’s said that they don’t consider themselves hard-core reenactors and and do this more for fun than anything else.

“ We enjoy this but try not to take it to serious.We like to dress up and have our picture taken” they told me.