“I thought I was a goner” 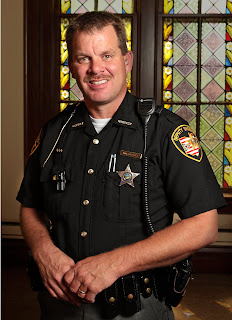 “I thought I was a goner”  Deputy Mike Maxwell a 19 year veteran of the Wayne County Sheriffs Office said when interviewed for this blog. Twice he had been officer of the year, frequently had faced dangerous situations, but what happened late last year is not taught in the police academy.

“In November of 2009 I got out of bed and my face was very swollen, I thought I had a food allergy so I went to work. By the end of the day the swelling was gone and I looked normal. The next day the same thing happened and again the day after that. “

“Over the next four weeks I made numerous trips to the doctor and they continued to check me for allergies.  Everything they checked for was negative. It was puzzling. I would go to work with my eyes nearly swollen shut and at the end of the day I was normal…it was odd. It seemed that the doctor could not figure it out.”  I was staring to feel very tired and my breathing was becoming difficult." This went on for nearly a month.

Mikes wife Donna  knew something was wrong and was frustrated by the lack of progress from medical officials. Soon, Donna began to search of the answer on her own.  After searching is symptoms on the internet, Donna discovered a possibility and it was not an allergy.

“It was my wife that suggested I get a chest x-ray and thankfully my doctor listened.” After receiving the x-ray Maxwell received a call from his doctor thirty minutes later. The x-ray reviled a grapefruit size tumor in the center of Mikes chest.
Mike had cancer and the tumor was close to his heart.

What was at first thought to be a food allergy was actually Non-Hodgkin Lymphoma.

The doctor told Maxwell he could call his wife and tell her she was right “you call her” Maxwell said  he told the doc.

“I thought how could this be, I am 41 years old, in great shape and have never been sick, and I have cancer? It was a shocker. My dad died of cancer when he was 58 years old. I simply thought I was a goner”.


With no real choice Maxwell submitted to aggressive chemotherapy followed by radiation treatments. His first treatment was just days before Christmas.

"I did better with the treatments than most. Of course I lost all of my hair and felt very fatigued after the treatments, but all in all the treatments went better than expected. It was quite an ordeal and the whole time your thinking is this going to work?"

"The treatments worked. The tumor is gone and I an showing no signs of cancer. I feel great. It will however be five years before I can be called cancer free."

When ask how he experience changed his life Maxwell said “I feel like I appreciate everything more, my family especially. I credit my wife with saving my life. The doctor who treated the cancer said I would have died within a month if I had not been diagnosed when I was”

Sheriff Thomas G. Maurer said of Maxwell... "Mike has proven himself time and time again to be a true professional in his chosen field of work. Encountering this medical concern its is not surprising to see him take it on in a direct, positive manner. All that know and or have dealt with Mike understand the commitment that he has to his family, his job and to himself. Mike is an inspiration to many.


Hoping to inspire others Maxwell said...
“I would be the last person most people would expect to be diagnosed with cancer. Treatment of the disease has came along way in the past few years. I would encourage anyone diagnosed not to give up. I am proof that you can be told you have cancer and survive.”
at August 07, 2010