A hobby shop is all about fun. 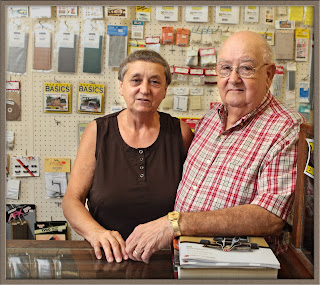 I would have guessed his age at 15, as the young man entered D&J hobby shop in Orrville.
The youngster approached the man at the counter and said “ I called about that rod thing for my car” the man reached under the counter and pulled out the package and said “is this what you need?” “Yep, that’s it” said the boy as he laid his money on the counter and soon left with a smile on his face.


For over 40 years Don Yoder the owner of D&J hobby has been putting smiles on the faces of hobbyist from around Wayne County and beyond.


“My father owned a radio and TV repair shop and I started my hobby shop there in a eight by eight room. If there were more than three people in the room it was too crowded," Yoder said with a laugh. The store moved to several Orrville locations before finding a home at its current location of 801 West Market Street in Orrville

“I have always had a love for model railroading and the store evolved from that” said Yoder. "When I started I went to a distributor in Cleveland and told him I wanted to open an account. The man asked me what the name of my store was and I said Don"s Hobby. Sorry the man said but we already have a Don’s. So I told him D&J Hobby… for Don and my wife Joyce.” The name D&J hobby stuck.

Yoder said it is difficult to get young people interested in modeling because there are to many other options today.

“Kids come in when they are five years old and see a model train and think it is the coolest thing ever. They come back when they are 19 and could care less. Many of them would rather play a video game. If you look at the statistics you will see the average age of model railroaders getting older and older.” Yoder said.

Most recently Yoder says that radio controlled cars have been a popular seller. He and friends host races twice a week for these cars at a specially made track located on Back Orrville Rd.

Yoder said that online sellers have taken some of his bussness but he still enjoys a faithful following of customers. Soon after him telling me that a man came in with his young daughter. The man and Yoder chanted about the current state of radio controlled car racing. Yoder commented “the cars have gotten too powerful and guys cannot control them”. But both agreed however that it is a man thing to want more power!

As I looked around of the shop I saw many things that reminded me of my youth. Replacement slot cars and track, electric train engines,  rocket engines, plastic model kits and even genuine Duncan yoyo replacement string. Things a person might think are long gone.

This is a store that will take you back a few years to a simpler time. A genuine "mom and pop" hobby and craft store. This is a place where you speak to the CEO each time you visit.