Did you know that "Bat Man" lives in Marshallville?

Baseball…It is called the great American pastime and Marshallville’s Mark Milich is doing his part to not only provide the sound of the “crack of the bat” but also heighten the safety of the players.


Milich provides bats to colligate teams, and training camps and many more who enjoy the custom bats. Each MDS bat is made in his one man shop located on Fulton Rd.

Milich credits his son Shawn for getting him involved in the manufacturing of baseball bats. Milich said that Shawn had just started playing class A baseball and bought three professional grade bats from a nationally known manufacture. Two of these bats broke during the first game. The third bat broke on game number two.

“He was a college kid with no money and all three of his expensive bats broke. I decided I would make him one myself” Milich said. His son did not like the first one but the second bat was another story and soon orders from other players started coming in.

The popularity of the bats continued to grow and soon other teams were wanting them. Milich as the list for customers grew Milich found the need to invest in a tracer lathe. This special lathe can copy one of Milich’s hand turned template bats in about 5 min. 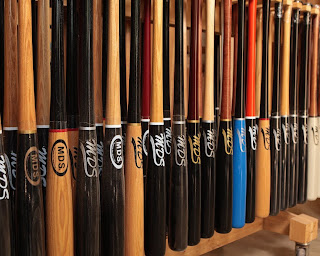 “When I started making the bats I was the only independent maker out there. Now there are at least eight of us.” Said Milich… the well known national manufactures have dropped their prices significantly in response to the independents.

Milich said that the most recent development is the introduction of the safety bat. The concept was developed and patented by a former New York police officer who picked Milich to be the sole manufacturer of the improved bat. Milich Said that the proprietary process produces a bat that will not break and fragment like conventional bats do.

“I am a purest. To me baseball has a heritage, it is about the crack of the bat. I hate to be at a game and hear the ping of a ball coming off of an aluminum bat. It‘s just not the same thing”

Milich said that he has been turning wood for a lifetime. After being first exposed to it in shop class at the age of 16.

When not making the bats Milich turns beautiful wooden vases. Each vase is turned on a lathe with Milich’s skilled hands holding the knives. Many of the vases are made from laminated wood.

“I make everything right here, from start to finish. I glue the laminates myself. I am completely self taught”. Said Milich.

When he says he makes it from start to finish, he is not kidding. Milich said most of his wood comes from the family farm that surounds his home. “we bring in a portable saw mill and saw the logs into boards and dry the lumber here” he said. Milich did say that he has to purchase some of the exotic woods from outside the area.

Why cremation urns of course. A local funeral home director made the suggestion and Milich has started production of these unique family keepsakes. Again turned by hand.

Milich said that he and his wife Linda attend art shows around the region about once per month where buyers quickly snatch up his work.

“Sometimes its painful to see them go. You put so much work into them you just hate to part with them” he told me.

Milich said that the time to produce a vase varies from a few hours to a few weeks depending on the design.

Milich hand signs and dates each vase and no two are alike.

“I can duplicate the design, but I cannot duplicate the grain or color of the wood. each of them are different. It is nature at its best!” Milich said.


If you would like to learn more you can visit his the MDS website at http://mdsbaseballbats.com/
at August 21, 2010