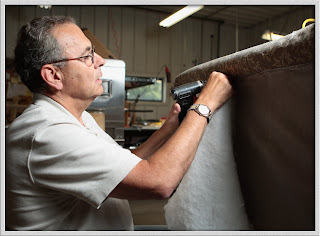 Within what seemed like seconds, the exposed couch arm was covered with new fabric and one step closer to completion. “This is the second time we have done this couch, the first time was 35 years ago” said Terry Chellis the owner of Chellis House located on Hutton Rd just east of State route 3 north of Wooster.

Chellis grew up in the business that was started by his father in 1952. Terry told me that he does “every type of upholstery imaginable with the exception of automobiles.
“Learning the craft from his father, Chellis said the profession also requires a certain amount of artistic ability.
I have the ability to visualize what the finished product will look like before I start it. When I was young I thought that everyone could do that, now I know that is not the case.  "As I was training with my father I had the advantage of being left handed and he was right. This allowed me to work at his side and literally mirror his every move."

Watching Chellis move around the shop it was clear that there were mutable projects going on at the same time. Moving from the couch, Chellis went to a large table that had a large tanned cowhide on it. Grabbing a pair of electric shears, he trimmed a one inch strip from the hide. “This is going to be a welt” he told me. Pretending to know what he was talking about I said " I See" 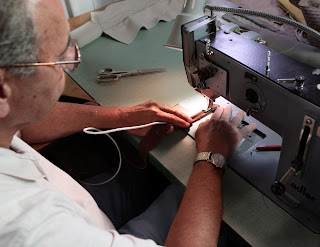 Soon Chellis fired up a industrial sewing machine and turned this leather strip into what I would describe as the trim (the welt) for an antique chair that was waiting to be finished.

In addition to reupholstering furniture Chellis also builds many custom couches and chairs. "Often a designer comes in with a sketch of something and we work from that. All of our products are custom and your cannot buy Chellis built furniture in any store. Theyare all built right here"  he told me.

“This is a dying profession, there is plenty of work but few people are willing to learn the trade. It has been over 15 years since someone has came in and said they wanted to learn to do this” Chellis explained. 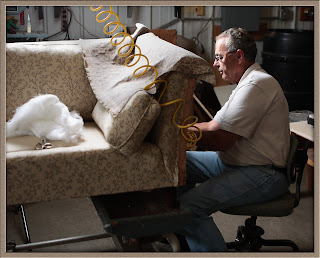 Showing me a chair that had been stripped to its bare wood frame, Chellis explained that the chair was over 65 years old but the frame was as solid as the day it was built. He told me that quality furniture frames seldom wear out. Soon the chair will have new fabric applied and will serve many more generations.

Looking back over the years Terry said that he values the relationships that he has built with his customers added that his profession as taken him to places that he would have never had the opportunity to visit otherwise.
at August 05, 2010