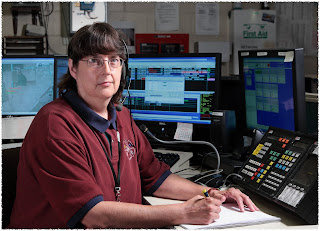 In a hot windowless room at Wayne County Justice Center you will find three people on duty at any given time. In this room are the men and women who are on the end of the line when you or I call  “911”  They are aways there.


On February 9th 1979 A young woman named Becky Beltz came to work as a dispatcher for the first time. After 31 ½ years she is still telling law enforcement officers “where to go”,


“I was young when I started and was a bit overwhelmed at the responsibly of the job. Scared was more like it. There is the potential for so much to he happening at any given time and you want to make sure you don’t mess up. This is a stressful job” Beltz told me.

She when on… “When I started we had the most basic of radios, a typewriter and a telephone. Today we have enhanced 911, computers, aerial mapping and far more technology that I would have ever dreamed about in 1979.”

When ask if this technology makes officers safer, she paused “ the technology makes things more efficient but it still requires a human to take the information and disseminate it. Most importantly it takes a person who cares about others” I still get a knot in my stomach when I call for an officer to check up when they are on a call and they do not respond. With all the technology we have we do not have the ability to visibly verify the officer is OK. Until you hear from them you simply worry” she said.

“I would not call myself proud, but I know I have always given my very best, I am not sure there is anything more I can do than just my best.  I care and have compassion."

Like most involved in public safety Beltz as found herself working odd hours, weekends and holidays. 911 is never “closed”

Speaking freely about her job. Beltz said “For the first 10 years of my career I dispatched for the Wooster City Police. Now we rotate positions every two months and I have the opportunity to dispatch not only the police department but the Sheriffs office, and many of the villages and the fire departments. I think that is a good thing”.

Lynne Feller trained Beltz and and is her current supervisor. Feller described Beltz as “the most trustworthy person I know. Becky will not take a piece of candy out of your dish without telling you”.

As our interview drew to a close Beltz said she plans to retire and the end of this month. “Its just time to try something new. My best bud Marie, retired a few years back and I miss her. We made a good team and the job is just not the same without her.”

She said she expects to spend more time with her family and plans to pursue a second career. Thinking of the future she said “I am not sure what is ahead, for the most part dispatching has been all I have ever done. It will seem odd not to come here to work but I look forward to a new challenge.
at August 06, 2010